Do you want to know what breaks my heart about doing this blog?  I'd love to put up more melodic stuff but most people only seem to be interested in the heavy stuff (with the amount of stuff I upload I've had to actually make a Mediafire account﻿ so I can keep track of what people are downloading).  Stuntface were a Metal influenced Pop Punk band from Wrexham in Wales, if you want a comparison they sound like Suburban Teenage Wasteland Blues-era Strung Out, hi-octane Pop Punk with flashes of Metallic Melodic Hardcore.  I got this from the band in the time before Paypal when you still had to write to bands and send a cheque (or if you were feeling brave, well concealed cash).  I read a review of a demo they did after this that apparently sounded more like thrashy Earth A.D.-era Misfits.  I did pick up one other album by them which got released on a small independent label (but big enough so that they got a review in Kerrap) where they dropped the Metal influences for a more generic Blink 182 sound which kinda well, sucked. 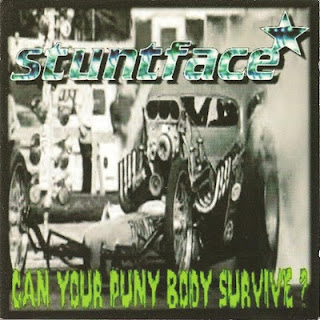 DOWNLOAD
As you can probably tell, I'm starting to run out of ideas for stuff to put up here, feel free to make requests in the comments﻿, or if you're in a band who gives out music for free over the Internet leave your Bandcamp address in a comment (if you upload music to Mediafire or other file hosting services make sure you also leave a link to artwork), I'll listen to all submissions and put up the ones I like.
Posted by _ at 00:31