Toecutter is Hangover Heartattack all growned up.﻿  The future of Man Hands is uncertain as Gareth has just left to do the refomed November Coming Fire full-time again.  I was at their last show in Margate a couple weeks ago but had to leave before they played as the show started late and I had to get the last train that went anywhere near me, I only found out later it was their last show with Gareth, bum, oh well, at least I got to see them three times in their short run.  The song Paedo Bikini on the Man Hands side is about the chainstore Primark selling padded bikinis aimed at prepubescent girls 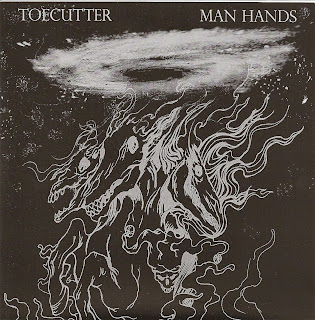